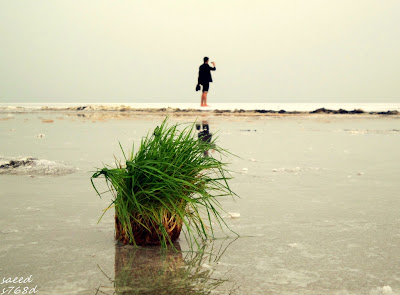 Lake Urmia (Turkish Language: اورمیه گولو , اورمو گولو Urmiya Gölü, farsi: دریاچه ارومیه Daryâcheh-ye Orumiyeh; is a salt lake in northwestern Iran, near Iran's border with Turkey. The lake is between East Azerbaijan and West Azerbaijan, west of the southern portion of the similarly shaped Caspian Sea. It is the largest lake in the Middle East, and the third largest salt water lake on earth, with a surface area of approximately 5,200 km² (2,000 mile²), 140 km (87 miles) length, 55 km (34 miles) width, and 16 m (52 ft) depth.
Urmia or (Turkish Language: اورمو, Urmu, Orumiyeh, Urmiye, Urmiya) is a city in Northwestern South Azerbaijan (Iranian Azerbaijan) and the capital of West Azerbaijan Province. The city lies on an altitude of 1,330 m above sea level on the Shahar Chaye river (City River). Urmia is the 10th populated city in iran and 2nd of Azerbaijanian Turks provinces after Tabriz. Urmia is the trade center for a fertile agricultural region where fruit (Specially Apple and Grape) and Tobacco are grown.An important town by the 9th cent.
The name Urmia or Urmu is thought to have come from Sumerian tongue, the earliest known civilization in the world located in southern Mesopotamia. Ur was a principle Sumerian city. Urmia, situated by a lake and surrounded by rivers, would be the cradle of water.The population of Urmia is predominantly Azerbaijanian Turks (over 90%), but with Kurdish,Assyrian and Armenian minorities.
Source Photo
Posted by Umud Urmulu at 5:32 PM No comments: