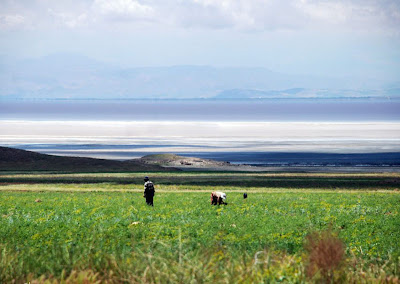 Urmia (Azerbaijani Turkish : Urmu اورمو  , Farsi: ارومیه; or Urmiyə); also Romanized as Oroumiyeh, Orūmīyeh and Urūmiyeh ; formerly, during the majority of the Pahlavi Dynasty [1925–1979] called in farsi: رضائیه - Rezaeyeh, Rezā’īyeh, Rezâiyye, and Rizāiyeh) is a city in and the capital of West Azerbaijan Province, Iran. At the 2006 census, its population was 577,307, in 153,570 families.
The city lies at an altitude of 1,330 m above sea level on the Shahar Chay river (City River). Urmia is the 10th most populated city in Iran. The population of Urmia is predominantly Azerbaijanian Turks (over 90%), but with Kurdish,Assyrian and Armenian minorities.
Urmia is situated on a fertile plain called Urmia Plain, on western side of Lake Urmia; and eastern side of Turkish border and marginal range of mountains.
Urmia is the trade center for a fertile agricultural region where fruit (especially Apple and Grape) and Tobacco are grown. An important town by the 9th cent., Urmia was seized by the Seljuk Turks (1184), and later occupied a number of times by the Ottoman Turks. Urmia was the seat of the first U.S. Christian mission in Iran (1835). Around AD 1900, Christians made up more than 40% of the city's population, however, most of the Christians fled in 1918.
Source of Picture: http://tinyurl.com/72gy4dp
Posted by Umud Urmulu at 11:51 AM No comments: